abc wednesday - K is for "kitsch" 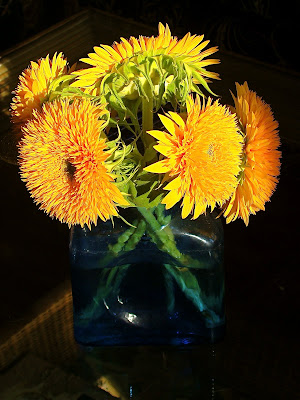 Not that much time left when we
can still find fresh flowers at the
greenmarket—so I'm going to
enjoy them while I can! 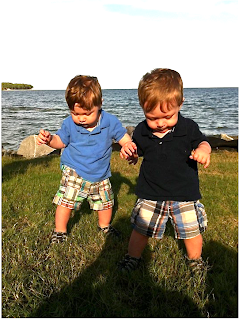 The twins—Toler and Banks—have just
discovered our fave thing: shadows!
If they turned around they'd see their
own, but meanwhile their moms'
(my friends Katharine—who took this
shot—and Katherine, aka
Ka-THAR-ine and Ka-THER-ine)
will do. 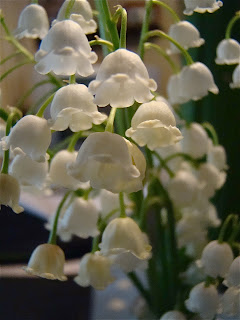 My favorite wildflower: lily of the valley—
maybe sometime you'll be in Paris on
May Day and someone special will give
you a "brin de muguet" (i.e., a sprig of
this delicate spring blossom). 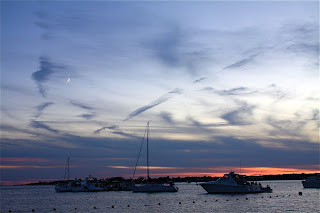 A party on the beach on Shelter Island
(where yesterday's post was from too)—
friends and family, good music, and a
beautiful sunset to boot! Life is good. 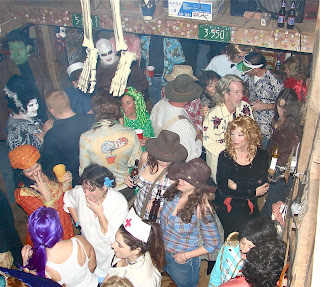 A costume party in a barn that's been
retrofitted as party central: dance floor
downstairs, bar up—add in some rockin'
sounds (The Lone Sharks, who else?), and
you have some major fun! I especially like
those cute cowgirls (but I would!). 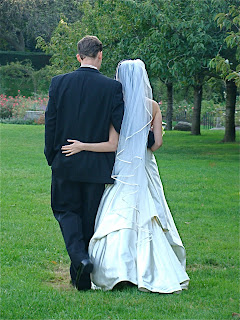 Oh, wait—there's no ring on her finger.
Okay, make that "just [about to be]
married." Since when do they take the
photos before the ceremony? Is this
something new? 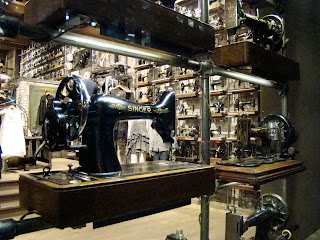 Saw this clothing store as I was strolling
down Broadway in Soho late at night.
I'll have to go back when they're open and
find out what's up with the hundreds
of antique sewing machines they have displayed
from floor to 30-foot ceiling. 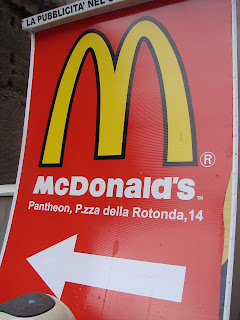 Seriously, is nothing sacred? Mellow is
not what I feel when I see this—at least
there are no golden arches to mar the
beauty of the Eternal City. 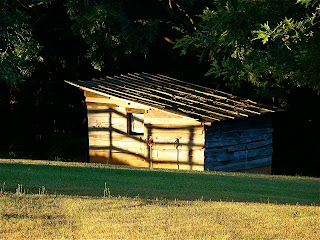 This little shed is near my cousin's house down
in Virginia. I've fantasized about moving in a
big brass bed, antique rug, and pretty curtains
for the little windows—and turning it into my
own cozy retreat. Guess it'll have to have
electricity too, since it seems I'm no longer
capable of living without my computer for
more than a few hours at a time. :~} 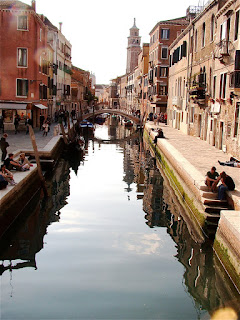 Back to Venice—where a sunny day
provides a gorgeous reflection
anywhere you look! (In this case,
it's the rio San Barnaba.) 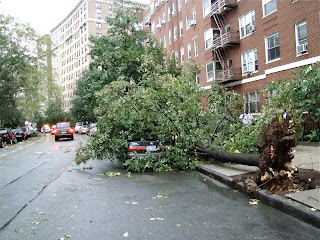 Well, the sky is only partially visible in this shot,
but it loomed large here in Brooklyn yesterday,
when a tornado tore through my block (and from
what I found when I got home, right into my
apartment!). This is my building, and one of
three trees on my street that were torn up from
the roots—each one tossed in a different direction.
Almost sorry I just missed it, as I was riding home
safe underground on the subway. 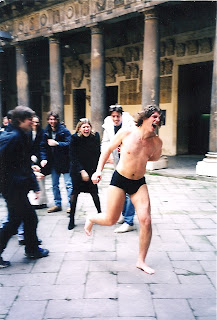 I took this at the University in Padua,
which I've shown before. This young man
had just gotten his degree and (as is
the custom) was being both lauded and
completely embarrassed by his friends:
They made him strip down to his shorts
(in March!) and run between them as they
slapped his back. Then they draped him in
a laurel wreath and paraded him
through the neighborhood.

abc wednesday - I is for "icon" 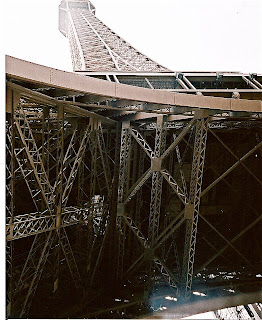 I'd like to thank the good folks at
abc wednesday for providing me
with yet another opportunity to
post a shot of my beloved ET.
This one was taken BD (before
digital)—waaay BD. 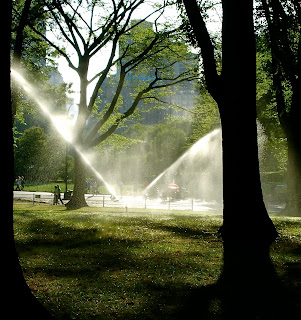 Central Park is definitely part of my world.
But I took this shot when we were still suffering
through the hottest summer on record.
This doesn't look quite as inviting this week—now
that the weather has changed. 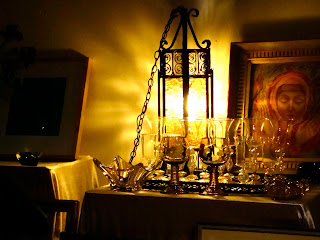 There's a fun flea market that takes place
every weekend in Brooklyn. On Sunday,
it's held in a former bank building—these
vendors have set up down in the bank's
windlowless vault. 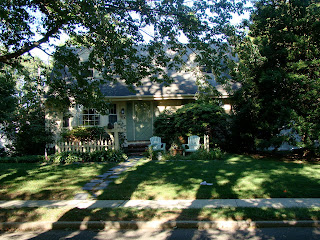 Welcome to the 'burbs. While walking
in my mom's neighborhood (where I
grew up), I came upon this house
that was engulfed in shadows! 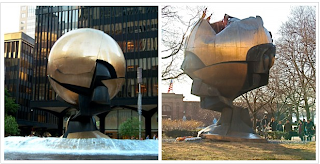 This sculpture by Fritz Koenig came through
the collapse of the Trade Centers relatively intact,
and was placed here in Battery Park
exactly six months later.  Found this in Wikipedia:
“The Sphere” is 25 feet high and cast in 52 bronze
segments . . . It was meant to symbolize world peace
through world trade, and was placed at the center of a ring
of fountains and other decorative touches designed
by Trade Center architect Minoru Yamasaki to mimic the
Grand Mosque of Mecca, Masjid al-Haram, in
which The Sphere stood at the place of the Kaaba."
Pretty ironic. 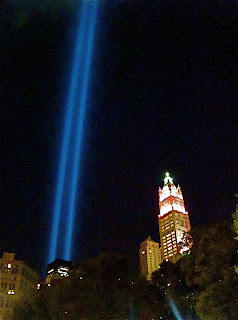 I usually get back to Brooklyn after work
and don't linger in the city. But if I hadn't been out
with a friend the other night I would have
missed this sight—from a couple of miles uptown,
we could see these two blue beams shining up into the
night sky from the site of the Trade Towers
and this shot was taken by City Hall,
about six blocks from Ground Zero. 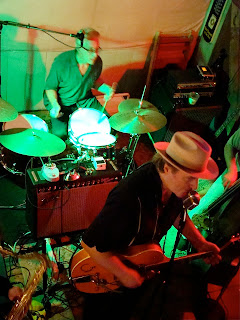 That's right—it's the fabulously
talented Lone Sharks! Hey,
did you really think I'd choose
anything other than my baby bro's
band for this particular challenge?


{You can hear them play in this
other "music" challenge.}

abc wednesday - H is for "hands" 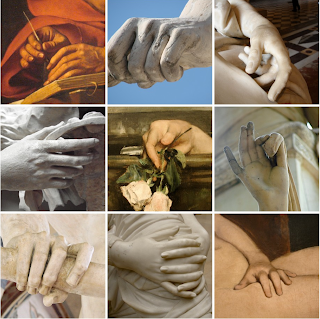 Whenever I look at a piece of art—painting,
sculpture, photograph, whatever—if there
are hands in it, that's where my eye is drawn.
And when you take a LOT of photos, it's nice
sometimes to focus in for a change. 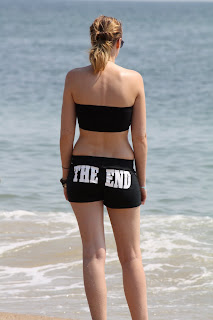 Well, I guess it's official: Labor Day
weekend has come and gone, and
the students in NYC start back to
school tomorrow—so it's definitely
the end of summer. Big sigh. 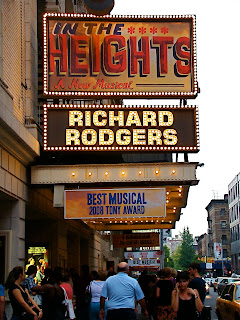 Welcome to Broadway! Like most people who
live in New York, I hardly ever make it to
the theater—but the show I'd love to see right now
is the one just down the street: Billy Elliot. 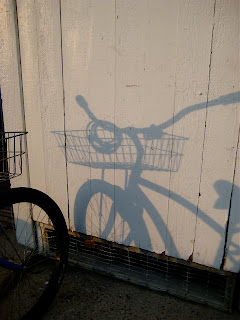 This shot was taken by my daughter Lila,
on Fire Island (where there are no cars and,
therefore, lots of bikes). When I remarked that
this would be perfect for Shadow Shot Sunday, she
said, "That's what I thought when I took it,
and I don't even have a blog—see
what you've done to me!" 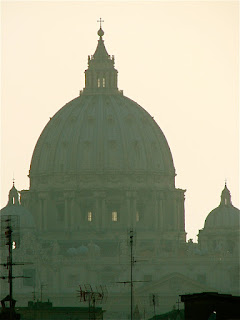 What's hot? Well, aside from Johnny Depp
and Javier Bardem, I'd have to say that Rome
in July is right up there. We had to admire
the dome of St. Peter's through a haze of
heat—but we were saved by gelato, lots and
lots and lots of gelato. 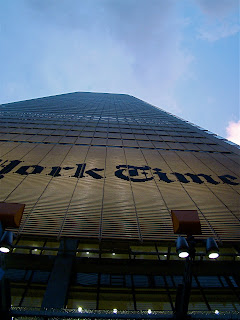 This is the (relatively) new New York Times
building. I don't even have time to read The Times
online, but my mother reads it cover to cover
every day—and does the crossword puzzle too.
Maybe that's why she's still sharp as a tack at the age of 90! 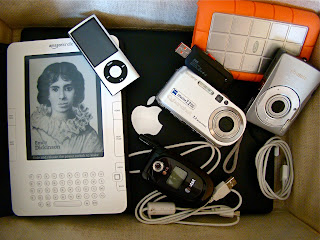 My kids like to point out how technologically challenged
I am. But not for nuthin' (as we say in Brooklyn), I
actually do know how to use all these things (and more).
Don't know about you, but I just seem to accumulate
more and more cameras and computers and drives and
ipods—and chargers, chargers, chargers!

abc wednesday - G is for "Ganesh" 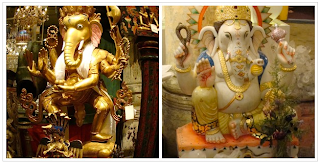 In the Hindu pantheon, Ganesh is a particular favorite
of mine. First of all, he is the Patron of Letters (and
I work in publishing).  He is also revered as the
Remover of Obstacles, and I can use all the help I
can get!  I found these two representations, classic and
kitschy, at my fave store, ABC Carpet and Home
(where they have—obviously—everything).

[See more interpretations of the letter G here.]
Posted by Alexa at 00:01 12 comments

Alexa
My camera has become the thing I can't leave home without. The computer is my new darkroom and this is a little gallery for sharing with all the wonderful friends I've made through blogging.

Please check out my other blogs: